LEO DONOVAN was the son of Maurice (Mossie) and Rachel Shannon Donovan.

Leo never married and had no children. 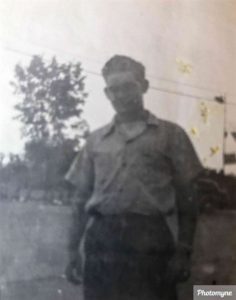 Leo joined the Navy January 11, 1945 when he was 17 years old. He served on the destroyer, John W. Weeks, in the Pacific Theater. 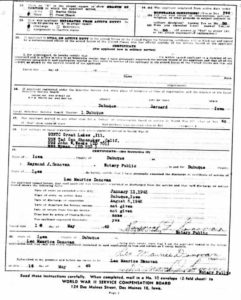 Deceased Name: Leo M. Donovan   Leo M. Donovan, 77, of 3125 Pennsylvania Ave., formerly of 10501/2 University Ave., died at 1:37 a.m. Wednesday, Feb. 2, 2005, at The Finley Hospital, Dubuque. Services will be at 10 a.m. Saturday at Nativity Catholic Church. Burial will be in St. Patrick’s Cemetery, Garryowen, rural Bernard, Iowa, where military rites will be accorded by the American Legion, Dubuque Post 6. Friends may call from 3 to 8 p.m. today at Behr Funeral Home, 1491 Main St., Dubuque, where there will be a parish wake service at 3 p.m. All members and past Chef de Gares are asked to meet at 7 p.m. today at the funeral home for a service of the 40 & 8 Society. Mr. Donovan was formerly employed at Caradco Mfg. Co. in Dubuque until his retirement. He was born on Feb. 13, 1927, in Garryowen, son of Maurice L. And Rachel B. (Shannon) Donovan. He served in the Navy during World War II on the destroyer, John W. Weeks, in the Pacific Theater. Leo was a member of Nativity Parish, the American Legion, Dubuque Post 6 and the Veterans of Foreign Wars. He was a proud and active member of the La Societe Des 40 Hommes et 8 Chevaux (40 & 8 Society), and was presently serving as the Chef de Gare (Commander) of Voiture 632, Dubuque County. He was a longtime member of the Dubuque YMCA and exercised daily for nearly 20 years. He passionately loved the St. Louis Cardinals and was an avid fan. Surviving are a sister, Kathleen M. Kane, of Dubuque; three brothers, Raymond J. (Doris) Donovan and Bill J. Donovan, both of Dubuque, and Alfred C. Donovan, of Albuquerque, N.M.; nieces and nephews; a brother-in-law, William Feeney, of Scottsdale, Ariz.; and a sister-in-law, Mrs. Gerald (Doris) Donovan, of Dubuque. He was preceded in death by a sister, Ethel Feeney; a brother, Gerald Donovan; and a sister-in-law, Eileen Donovan. A Leo M. Donovan Memorial Fund has been established. (transcribed by Erin Gentz) 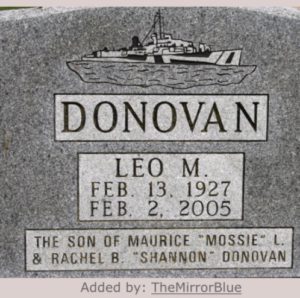 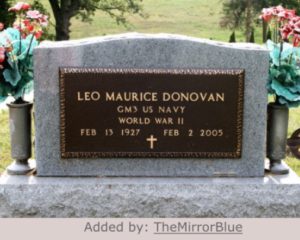