Maurice died on February 7, 1922, in Butler, Iowa at the age of 72. He and Mary Ellen are buried in the cemetery at Saint Patrick Church, Garryowen, Iowa.

Maurice Donovan, who was a son of the late Richard Donovan, was born on the old homestead in Buter township, July 4, 1849, and passed his entire lifetime in the vicinity of his birthplace. He was married to Mary Ellen Shannahan, who survives his with the following children: Mrs. John Barrett, of Dubuque; Mrs. Louis Finn, of Temple Hill, Jones county; Richard, John, Maurice, Martin and Cornelius, at home. Two daughters preceded him in death.

Mrs. Donovan was a man of most excellent character, a true type of Christian citizen and devout member of the Catholic church, and his death is sincerely mourned by his family and many friends. 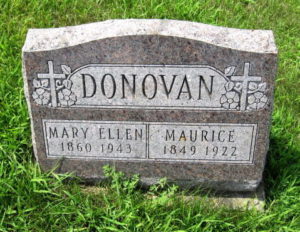