CATHERINE DONOVAN DEGNAN is the daughter of Richard and Honora O’Brien Flanigan Donovan. She was born in 1855 in Garryowen, Jackson County, Iowa.

They had two children:

Catherine Donovan Degnan died in 1889 when her babies were born. She is buried in St. Patrick Cemetery, Garryowen, Iowa. 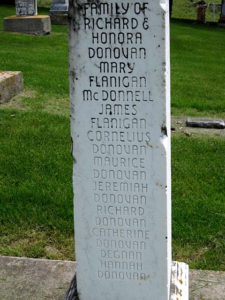