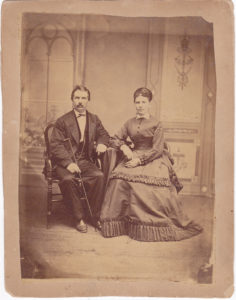 Mary Ann and her sister Doris Kay are the first in what I hope are many new Donovan family members not directly linked to Maurice Donovan and Mary Ellen Shanahan. Up until this point, all in our group have Maurice and Mary Ellen as grandparents of some degree. They were uncle and aunt to Mary Ann and Doris. With Mary Ann’s input a few questions have answers and a whole new area of inquiry has opened up.

Richard and Honora had six children together. Their first four were boys. Catherine was the fifth child and first daughter born. She was born in 1855. According to the family Donovan headstone, Richard was 40 and Honora was 46 when Catherine was born. (46?)

Sidenote: Birth records for Richard and Honora are fluid. I use the dates from their headstone as they are literally “etched in stone.”  If Honora was born in 1809, she had her youngest child, Hannah, at the age of 49. It’s feasible, yes, but I kinda doubt it. The census records of the time show Richard’s birth about 1810 (not 1815 from headstone), and Honora’s birth about 1819, which would have Honora having her last child at 39 years old.

Back to Catherine – She was born in Bernard on the family farm. In 1880, when she was 25, Catherine lived in Dubuque County, Prairie Twp., with the Driscoll family as a servant, keeping house for John and Ellen Driscoll and their six children.

Twin – Frank Jr. lived with his uncle and aunt, Maurice and Mary Ellen Donovan until he was 11 years old; then his father, Frank Sr. took him to live in Chicago where other Degnan family lived. Frank Sr. had moved to the Chicago area shortly after Catherine’s death.

Not much is known about this time in Chicago. Some federal records from 1890 for Illinois were destroyed by fire. In 1900, Frank Sr. was living with his sister, Mary Ann and her husband, John Kane. … So Frank Jr. would have been living as a boarder in the Kane household with his father.

His stay in Chicago was short lived. In 1905, at the age of 16, Frank Jr. was living in Dyersville, Iowa, possibly with his aunt Maria Degnan.

Sometime between 1906 and 1913, Frank Jr. returned to Chicago, where he passed away in 1913 at age 24. Records show he is buried in Bernard but his grave has not been found.

Frank’s twin sister, Katie, was taken in by the Maloney family who were relatives of the Degnan’s. (a Margaret Maloney witnessed Katie’s marriage ceremony).

The photo album belonged to Katie Degnan Ryan. The Ryan family is hoping to identify some of the people. There may be some Donovan’s in the album, but from what we know, Katie was raised by Degnan relatives – Maloney. My guess is this is more Degnan, Ryan, and possibly Maloney family – late 1800’s to early 1900’s.

There are fascinating photos here, very intricate and ornate clothing, hair, details. If anyone has thoughts on who is pictured, please leave a comment or pass on the information to others who may know. If you dabble in genealogy, keep in mind family names Degnan, Maloney, and Ryan (about as common as you can get). These families lived in the Bernard area in the 1890’s-1920ish time frame. As you can see from photo locations, the family members traveled on to various areas of the country.