On September 16, 1893, a group of settlers estimated to be around 100,000 strong, awaited the opening of the Cherokee Outlet. At high noon on that day, the Land Rush of 1893 began in what I imagine was barely contained mass chaos. 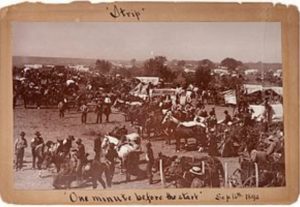 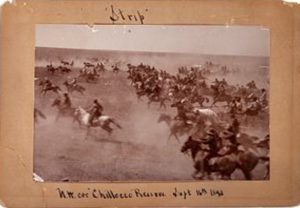 Prints above show: “One Minute Before the Start” Sep. 16th 1893 and N.W. cor “Chilloco Reserve Sept. 16th 1893. These historic images document the “rush” for new homesteads in the 225 mile long, 58 mile wide “Cherokee Strip” between southern Kansas and Oklahoma Territory. Sold by the Cherokee to the government, by the time of the opening, more than 100,000 people gathered on the border, nearly 30,000 alone around Arkansas City. At noon on the 16th, the homesteaders, most mounted on horseback, but others on foot and in wagons, “boomed” across the border to secured prime claims (wikipedia entry). A first hand accounting of the day can be found here.

George Johnson, known as “Cook” may have been amongst this group of pioneers. He settled in Rusk, Oklahoma, married Lucy Moore in May, 1895. They had nine children in ten years.

“Cook” Johnson’s brothers, John, Charley, and Pete, decided to follow their brother’s lead, and in 1900, they began preparing to move their families and belongings from Emeline, Iowa to Rusk, Oklahoma.

John Johnson and his wife Sarah had three children at that time; Blanche, Gerty, and John. Contained here is Blanche’s account of the trip taken in 1901. Blanche’s grandson, Michael Houselog typed out his Granny’s recollection of that time:

Gramma Donovan_s Trip in a Covered Wagon from Oklahoma to Iowa in 1901.

Michael adds: “In 1900 my grandmother Blanche Johnson Donovan and her family sold their family farm in eastern Iowa and decided to move to Oklahoma. Gramma Donovan would marry Richard Donovan in the early 1920’s and raise 5 children including my mother Lois Houselog. I genuinely loved her stories, her love of life, and sense of humor. Over 50 years ago my mom coaxed me to sit down with my Gramma and reduce this particular story to writing. I had remembered her telling this story dozens of times and she told it the same every time. I’m posting this story that we worked on together. She was a 71 year old and I was 12. What is posted is my typing on a portable Underwood Olivetti typewriter in 1964.”

Thank you, Mike Houselog for sharing this glimpse into our frontier families and a snapshot of what it was like at the time in day to day life – killing tarantulas? WHAT??? If we let our children do that now, we’d be arrested! Also, some historical perspectives, with President McKinley’s assassination, for example. What a great story, a fond memory for you, and now also for us.